You Are Here Home » Asian Recipes 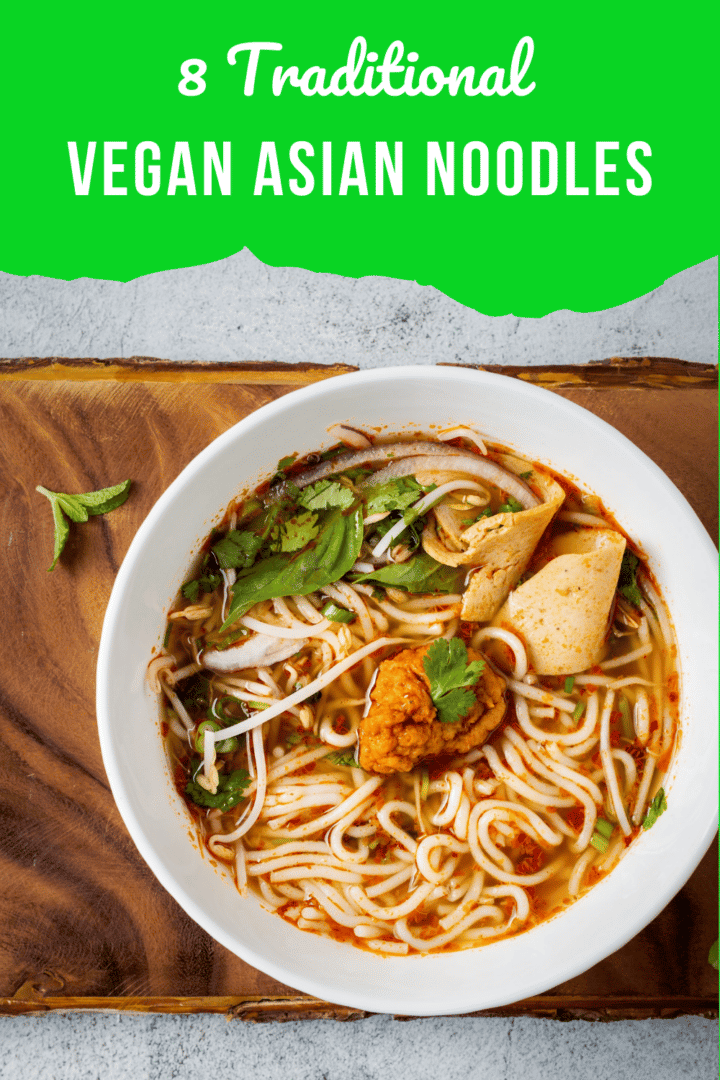 Is there anything better after a long day of work than a bowl of ramen, phở, spring rolls, or pad Thai? However, you may find yourself asking, "What types of Asian noodles can I have? Are ramen noodles vegan? Wat about somen noodles? Can I eat bibim naengmyeon when I go out for Korean food?"

So many delicious Asian dishes have become synonymous with "comfort food" for millions of people around the world. For those who adhere to a vegan diet, however, it can be difficult to determine which of these foods are okay to eat. Even if the broth or the protein can be substituted, one has to also consider if the dish is prepared with vegan noodles. So what Asian noodle types are vegan-friendly?

I like to do the bulk of my grocery shopping at my local Asian markets. If you've ever been in the noodles aisle of H Mart or 99 Ranch you know how overwhelming the selection can be. Especially if you're unsure which of the options are vegan noodles. In this guide I'm going to discuss some of my favorite Asian noodle types, and which to avoid if you're trying to keep vegan.

Wheat is the most common grain used in the making of noodles & pasta around the world. The vast majority of these noodles are also made using egg, an animal byproduct, making these a no-go for vegans. However, there are some exceptions that can be found in Asian cuisines.

Ramen is by far the most common Japanese noodle dish. In fact, I'm willing to bet most of us probably have some instant ramen in our pantries right now. Traditionally, ramen noodles are made of wheat flour, water, salt, and alkaline water known as kansui.

Many people assume that ramen noodles' yellowish tint comes from the egg being used as a binding agent in the dough. However, this isn't the case. The color actually comes from the addition of the kansui, whose earthy minerals provide both the yellowish color and the noodles' chewy texture.

So, are ramen noodles vegan? Yes, traditional ramen noodles are made without using any animal byproducts, meaning they're completely vegan! It should be noted that some brands make their noodles using calcium derived from eggshells. Double-check the ingredient list just to be safe!

I also want to clarify that the seasoning packets that come with instant ramen are typically not vegan. There are a handful of vegan flavors out there, like Top Ramen's Chili flavor, or Cup Noodle's Very Veggie Soy Sauce flavor.

Pro Tip: If you can't find any packs of ramen with vegan flavoring packets, I have a solution! I prefer to make my own ramen broth from scratch anyway. Toss the packet and try a homemade broth like the one in this 15 Minute Vegan Miso Ramen.

Udon is another very popular type of Asian noodle and is often served in a broth, though it can be in cold noodle salads or as a base for a stir fry. Udon noodles are much thicker and chewier than ramen noodles, and much paler in color.

They are usually sold pre-cooked in vacuum-sealed packages in the frozen section, but you can sometimes find them dried. Traditional Japanese udon noodles are made from nothing but wheat flour and water, though some variations add potato or corn starch.

So, are udon noodles vegan? Because their only ingredients are flour, water, and maybe a little starch, udon is 100% vegan. Sometimes they are served in a meat or fish-based broth, but there are many dishes that are vegan. I recommend something like this yaki udon with tofu, mushrooms, and peppers.

Somen noodles are often overlooked here in the United States, but in Japan, they're another very common type of noodle. They're very thin and delicate (think angel hair) and are pale white in color.

These noodles are made from wheat flour and oil, giving them a slippery texture perfect for slurping. Slurping is seen as a sign of appreciation and respect in Japan and allows you to fully experience the flavor and aroma of the dish.

Somen noodles are usually served cold and are eaten with a cold dipping sauce called tsuyu, which has a smoky, fishy flavor.

So, are somen noodles vegan? Yes, somen noodles are a great vegan option! However, as I mentioned previously, the tsuyu they're traditionally served with contains fish. Luckily, you can find vegan alternatives like this dashi tsuyu recipe or my Gluten-Free Soba Noodles Salad.

Naengmyeon is a dish that originated in North Korea in the Joseon Dynasty (1392–1897). The noodles consist primarily of buckwheat, sweet potatoes, potatoes, arrowroot starch, and kudzu. They're another one of those Asian noodle types that are typically served chilled, though they're also, less commonly, served hot.

Bibim naengmyeon is served with a spicy dressing made from gochujang and red pepper flakes. Both varieties can be made vegan, though they are sometimes topped with meat or boiled egg. The noodles themselves, however, are perfectly vegan!

These Japanese buckwheat noodles are similar to Korean naengmyeon noodles. They are often served chilled, usually in a salad or with a dipping sauce, but can also be served in hot dishes such as soup or stir fry. Soba noodles have been a crucial element of Japanese cuisine for centuries and were often served to Zen Buddhist monks before fasts or long periods of meditation.

So, are soba noodles vegan?

Soba noodles themselves are made with only buckwheat and water, meaning they are in fact an excellent vegan option! They are one of Japan's most versatile noodles, commonly served in many different dishes, some vegan and some not. I recommend trying a light refreshing dish like these vegan asian noodles with tamari, ginger, and sesame.

Rice noodles are believed to have originated in China sometime between the years 259-210 b.c. Since then, they've become a staple in countries all across Southeast Asia. They're commonly eaten in Vietnam, Thailand, Cambodia, Indonesia, Laos, Malaysia, the Philippines, and more!

Rice noodles are one of the most widely used noodles in Southeast Asian cuisine. In Vietnam, these noodles are used to make phở, a dish consisting of hot broth, herbs, and meat. The Thai use them in their national dish, pad Thai, or stir-fried rice noodles served with peanuts, lime juice, scrambled egg, and shrimp.

So, are rice noodles vegan? Yes, they are! Rice noodles, as the name suggests, are made using rice flour. There are no animal byproducts, and no gluten either, making them gluten-free as well!

Glass noodles are another variety of noodles that have origins in China. These days they are seen in many unique dishes throughout Southeast Asian cultures. They're usually sold as opaque dried noodles and become translucent and glass-like when cooked.

These are probably the most common variety of glass noodles. They have an almost gelatinous texture, and not much of a taste at all. Because of this, they're excellent at absorbing the flavors of whatever they're cooked with.

Like many of the noodles on this list, they can be served hot, cold, in a soup, or in a stir fry. However, they're also used to stuff vegetables, crispy spring rolls, omelets, and even chicken wings!

So, are cellophane noodles vegan? Traditionally, these noodles are made from water and mung beans, though it has become common to make them using peas and corn starch. Either way, these noodles are a safe option for vegans and gluten-intolerant noodle lovers alike!

These Korean glass noodles are my favorite noodles of all time! While most widely used Asian noodles have long histories steeped in tradition, these noodles weren't invented until 1919.

Interestingly, they were inspired by cellophane noodles after the Gyeonggui train line was completed in 1906, allowing the introduction of Chinese food into mainstream Korean culture. They're used in many Korean dishes including kimchi dumplings, bulgogi stew, and, most famously, japchae (this is a must-try!)

So, are dangmyeon noodles vegan? Like cellophane noodles, dangmyeon noodles are both vegan and gluten-free! They're made using sweet potato starch, water, and salt, and are an excellent base for vegan (and non-vegan) dishes.

🍜 So, Which Asian Noodle Types Are Vegan?

Unfortunately, there are still many types of widely used noodles that do not correlate with a vegan diet. Still, it's better to be aware than to accidentally consume something you thought was vegan only to find out later that it wasn't. While you may be able to find some vegan varieties, be wary of chow mein, lo mein, wonton noodles, and, of course, egg noodles.

Are ramen noodles plant-based? Yes, traditional ramen noodles are made without using any animal byproducts, meaning they're completely vegan! It should be noted, however, that while the vast majority of instant ramen noodles are vegan, some brands make their noodles using calcium derived from eggshells. Double-check the ingredient list just to be safe!

How about udon noodles? Because their only ingredients are flour, water, and maybe a little starch, they are 100% vegan.

Naengmyeon noodles? While mul naengmyeon is usually served in a meat-based soup, bibim naengmyeon is typically vegan-friendly, though it is sometimes served with egg or meat on top. The noodles themselves are vegan, just be aware of what ingredients they're being prepared with!

Soba noodles? Soba noodles themselves are made with only buckwheat and water, meaning they are in fact an excellent vegan noodle!

Rice noodles? Rice noodles, as the name suggests, are made using rice flour. There are no animal byproducts, and no gluten either, making these delicious noodles not only vegan but gluten-free as well!

Cellophane noodles? Traditionally, these noodles are made from water and mung beans, though it has become common to make them using peas and corn starch. Either way, these noodles are a safe option for vegans and gluten-intolerant noodle lovers alike!

Dangmyeon noodles? Like cellophane noodles, dangmyeon noodles are both vegan and gluten-free! They're made using sweet potato starch, water, and salt, and are an excellent base for vegan (and non-vegan) dishes.

What noodles are vegan?

Ramen, udon, somen, soba, glass noodles, naengmyeon, and rice noodles are all typically made vegan-friendly, but naturally, there may be some variation between brands so always check the ingredients list just to be safe!

Rice noodles, as the name suggests, are made using rice flour. There are no animal byproducts, and no gluten either, making these delicious noodles not only vegan but gluten-free as well!

While eggs are a great source of protein for those following a vegetarian diet, egg is considered an animal byproduct. In other words, egg noodles, and anything made with egg for that matter, are not suitable for those adhering to a vegan diet.