You Are Here Home » Drink Recipes 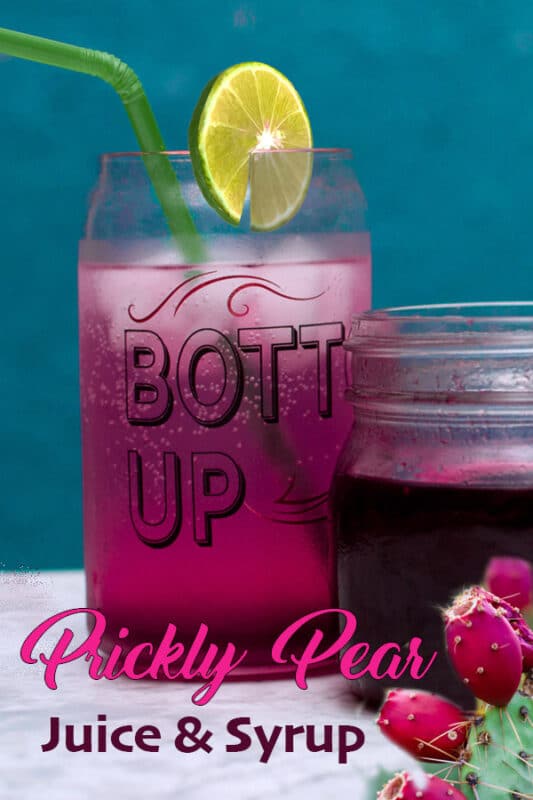 Prickly Pear Juice and Prickly Pear Syrup don't just taste great, but they can also be used to make all kinds of wonderful treats. For example, how does prickly pear margaritas, jelly, or salad dressing sound? Or pour it over pancakes. You're only limited by your imagination!

I still remember the first time I tried a prickly pear (also called tuna). It was many years ago, while Scott and I were new in our relationship. Growing up in Arizona, where nopal grow in abundance, Scott was excited to introduce this Chicago girl to this delicious fruit.

Scott picked the fruit off the cactus for me, all the while trying to avoid thousands of tiny needles.

Using his pocket knife, Scott peeled the burgundy, needle-covered skin back, and sliced a piece of the juicy fruit for me to try. I was amazed at how good it tasted and wanted more.

Since then, I always get excited when I see a cactus loaded with fruit. However, I'm not usually prepared to pick them. Especially since the tiny needles were put there by Satan himself and must be avoided at all cost!

With the right tools, however, and a little preparation, you can safely pick and use prickly pears to make this and other recipes. Here's a video to show you how to pick them safely.

If you don't want to brave the needles, I get it. You can also find needle-free prickly pears in many ethnic markets.

This is a recipe for making Prickly Pear Juice, which in turn can be used to make Prickly Pear Syrup. Of the two, the juice is the healthier option, since no sugar is added.

Prickly Pear Syrup, however, is definitely the tastier of the two options. Enjoy the prickly pear syrup drizzled over pancakes, or use it to make prickly pear shakes, Margaritas, ice cream topping, and the like.

Follow the steps on the bottom of the post in "Cook's Tips" for handling and peeling the cactus pears.

Slice or chop the prickly pear into sections and add to a medium-sized pot.

Cover with water and bring to a boil. Simmer, over medium heat, for 20 minutes.

Using a masher, mash the fruit to release their juice.

If you prefer, use a hand-held immersion blender instead.

Strain the mixture through a fine-mesh strainer into a medium-sized bowl. Be sure to scrape the bottom of the strainer, where the pulp collects.

Stir citric acid into the strained juice. This not only enhances the flavor but also aids in preserving the juice. You can use lemon juice if you need to.

Mix with your favorite sweetener, and serve over ice. I dilute the juice with water, Lacroix, or clear soda.

Some like to drink it without diluting it, however, until you know how your body reacts to prickly pears, I recommend trying it in smaller quantities.

What are prickly pears good for?

The flesh of the fruit can be eaten raw or used to make Juice or Syrup. One drawback to eating them is that their flesh is riddled with hard seeds.

This is why juicing the fruit is a good way to enjoy the taste and benefits of the prickly pear fruit, without the hassle of trying to avoid the seeds.

I, personally, think that the prickly pears' taste is rather unique. What I can tell you is that they are sweet when ripe, without any sour flavor.

What are the benefits of eating prickly pears?

Although more research is needed, prickly pears show a lot of promise when it comes to health. I found these facts on WebMD.

Diabetes—Prickly pear consumption can reduce blood sugar levels by up to 48% in some people.
High cholesterol—When consumed regularly, prickly pears can reduce total and bad (LDL) cholesterol levels.
Enlarged Prostate—A powder made from dried and ground prickly pear cactus flowers may reduce symptoms related to an enlarged prostate.
Hangovers—Taking prickly pear extract before you drink alcohol can reduce some, but not all hangover-related symptoms.

Can prickly pears make you sick?

Although I've never experienced any issues, and have not seen any warnings posted when I've purchased them, I did find the following information on WebMd.com:

Keeping that in mind, I would start with small amounts and see how your body reacts to prickly pears before pouring Prickly Pear Syrup on everything!

Although I don't use them, I do recommend wearing thick gardening gloves to avoid the tiny needles/spines. Personally, I prefer to roll the dice.😉

If using foraged prickly pears, instead of store-bought, use tongs to hold them and quickly rotate them over an open flame to burn off the almost invisible needles.

Slice off both ends of the fruit and carve out the "crown" which is loaded with needles. Next, make a vertical slit through the skin.

Carefully remove the skin from the prickly pear. You can either peel it off in one section or make several cuts and peel the skin down, as pictured. 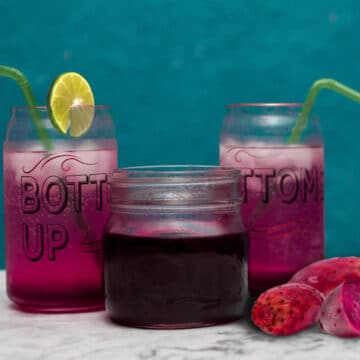 Although I don’t use them, I do recommend wearing thick gardening gloves to avoid the tiny needles.  If using harvested prickly pears, instead of store-bought, hold prickly pears with tongs and quickly rotate them over an open flame to burn off the almost invisible needles.