Gooey, sticky, and so delicious, the first nougat recipe dates back to the 10th century! "Nougat Bars" might not sound very Middle Eastern, but the origin of nougat, in fact, is. In the Middle East, it's known as Mann Al Sama or Manna Wa Salwa.

The earliest nougat recipe was found in a Middle Eastern book in Baghdad, dating back to the 10th century. It was referred to as "natif" which translates to "dribble."

The name I'm more familiar with is "Mann Al Sama," which is an Arabic term. When translated, "Mann Al Sama" means "Manna From Heaven."

The book of Exodus, in the Holy Bible, tells us that God rained down "Manna" from heaven, as a response to the Nation of Israel's grumblings about being hungry.

This happened while they were in the Sinai Desert. Interestingly, the word "manna" also means "plate" in Assyrian.

How to make Mann Al Sama/Nougat

This is one of those recipes that requires you to move fast. For that reason, plan on making this recipe when you can work without any interruptions.

This means the dogs outside, bribe your husband to take the kids to the park, and get ready to dash from one side of the kitchen to the other.

Also, have all your ingredients measured and ready. This includes the required tools: a prepared pan, an egg separator, oiled spatulas, a bowl scraper, a mixer, and a candy thermometer.

I don't know if you're nostalgic like me; I prefer making Mann Al Sama like the one I had it when I was a child.

To accomplish this, you have to shape the nougat into golf-sized balls, with the nut-filling sealed inside, instead of mixed throughout. Here's how it's done:

Follow the recipe steps listed in the recipe card. However, after toasting the nuts, add to a food processor, and pulse. Mix in the cardamom. Set nuts aside; do not mix in with the nougat!

After pouring the nougat into the prepared pan, cool on the counter for five-ten minutes, until easy to handle.

Pinch off a small portion of the nougat, roll into a ball, then flatten into a bowl shape.

Fill with the nut mixtures, seal, and roll into a ball.

Place on a floured tray, and continue with this process, until you've used up the entire mixture.

Handling the nougat before it's cooled off can get messy. If the filling comes out, don't panic. Just roll it into a ball, like the one in this picture. It will taste just as good as the rest!

The Differences Between Mann Al Sama and Traditional Nougat Bars

The Mann Al Sama I remember eating as a child was shaped into small balls or patties. Also, the nut-filling was in the center, like a surprise waiting to be discovered. Nougat has the nuts mixed throughout.

Unlike plain nougat, Iraqi nougat has either cardamom, rose water, or both added. Another difference is the texture. Whereas nougat is usually soft and chewy, Iraqi nougat is crunchier.

So why are these Iraqi Nougat Bars called "Manna From Heaven?" Well, traditionally, they were made from a sticky sap found on leaves lying on the ground, under tamarisk trees.

It was thought that the sap rained down from heaven, much like manna. This "dew" tasted as sweet as "honey!"

Leave it to the ingenuity of Iraqi women, who removed the dirt and debris from the sap, then boiled and strained it.

The sap was then mixed with nuts, and spices, including cardamom, and enjoyed as a sweet treat. Cardamom makes everything better, am I right?

These days we can make these similar-tasting nougat bars with ingredients more readily available, like the ones found in this recipe.

What do Mann Al Sama and Jonah have in common? Well, Jonah was a prophet, who was told by God to go to the great city of Nineveh and tell its people to repent from their wicked ways or be destroyed.

Jonah hated the Ninevites, so he did not obey. Instead, Jonah got on a boat headed to Tarshish, which was in the opposite direction. As a result, Jonah found himself in the belly of a large fish for three days.

After being spat out, he obeyed the Lord and headed to Nineveh. As a result: "...the Ninevites believed God. A fast was proclaimed, and all of them, from the greatest to the least, put on sackcloth"—Jonah 3:4-5.

Rogation of the Ninevites

Assyrians still hold this fast, which falls in February. The fast is known as "Bauta it Ninweh" or "Rogation of the Ninevites."

Traditionally, Al Sama is served to break the fast.

Why that tradition started, I can't tell you. However, growing up as a child in Iraq, I remember looking forward to this mysterious treat that only showed up once a year.

A large tray, loaded with Mann Al Sama, coated in flour (to keep them from sticking together) would be passed around.

As it made its way around the crowd, everyone would take and eat a piece, breaking their fast. It's one of my favorite childhood memories!

Recently, I had a talk with my aunt, regarding another interesting tradition having to do with the Nineveh Fast.

I remembered mom talking about this tradition, but had to have Aunt Alice clarify some of the facts.

On the last night of the three-day fast, a powder referred to as "Pookhin" was made with a mixture of seven grains (including chickpeas, corn, and seeds).

Women consumed this thirst-inducing concoction, followed by a pinch of salt. This was done by dipping their thumb into the powder and straight into their mouths.

Once "" was consumed, they would have to go straight to bed. It was hoped that going to bed in extreme thirst, would result in dreaming of a man who would offer them water to quench their thirst.

But not just any man, this man would be their future husband!

For more Middle Eastern sweets, check out the following posts: 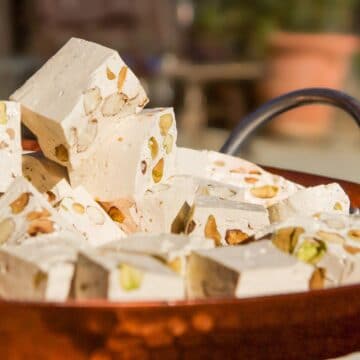