You Are Here Home » Breakfast Recipes 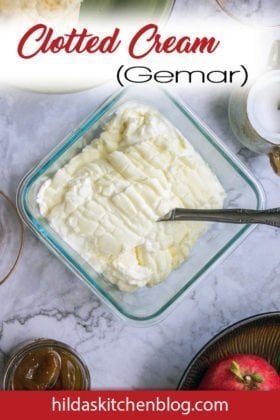 This easy clotted cream recipe (geymar in Assyrian, and kaymak in Turkish) is creamy, delicious, and rally easy to prepare. While clotted cream is usually served with scones, in the Middle East, it's enjoyed for breakfast with pita bread, jam, and tea. It's also used as a filling in some pastries.

Traditional geymar has a sweet and creamy rich taste making it very decedent. I guess you could compare it to cream cheese, but sweeter and richer.

My mom made geymar the traditional way, which means she did not add cornstarch. It required hours of simmering, a lot of waiting, and a little bit of luck. Sometimes it turned out great and other times it didn't thicken up as much as she'd hoped.

The mixture is simmered over low heat for hours then poured into a wide, shallow pan so that the thickened cream can be skimmed off the surface area and rolled onto itself. But first, you have to allow the cream to set in the refrigerator for a minimum of 12 hours or up to a few days.

Eventually, the thickened cream is scooped from the surface, leaving some cream behind. The cream can be used in other recipes including homemade yogurt, or boiled again and the process repeated.

This dish is not only popular in Iraq and Turkey, but is also enjoyed in Iran, Afghanistan, Greece, and throughout the balkan countries.

What You Need To Make Geymar (Kaymak)

How to Make Clotted Cream (Kaymak)

Step 1. Stir cornstarch into half & half until smooth, then set aside.

Step 2. Heat heavy whipping cream over low heat until bubbles begin to form around the edges of the pot.

Step 3. Whisk half and half and cornstarch mix into whipping cream and continue to stir over a low flame until the mixture thickens. This can take anywhere from 10 to 15 minutes. The consistency should resemble thick pancake batter.

Step 4. Pour the cream mixture into a shallow pan and bring to room temperature.

5. Once cooled, place the pan in the refrigerator for a few hours. Serve for breakfast with bread, date molasses, or honey, and don't forget the chai!

What Is Clotted Cream Used For?

If you sit down to a proper English tea, you're sure to find clotted cream alongside your scones and tea.

Much like we use butter and jam in the United States; it is smeared over freshly baked scones and topped with jam.

However, you can just as easily spread it over toast. In the Middle East, geymar, called kaymak in Turkey, is used as a filling for a phyllo dough dessert called "kahi." Sometimes it is also tucked inside crispy kataifi and drenched in syrup. This heavenly dessert is called kunafa.

What is half and half?

Half and half is made with a combination of cream and whole milk. Besides adding richness to coffee, you can use half and half in recipes that call for cream (as long as it doesn't need to be whipped).

What do you serve with geymar?

In the Middle East, geymar is served for breakfast, alongside date molasses, pita bread, fig preserves, and freshly brewed tea.

What is kaymak made out of?

Kaymak is prepared with full fat milk or half and half, and heavy cream from cows, goats, and water buffalos. The cream is slowly boiled, allowing the fat to rise to the surface. Once cooled, this thick layer is carefully removed and eaten for breakfast. 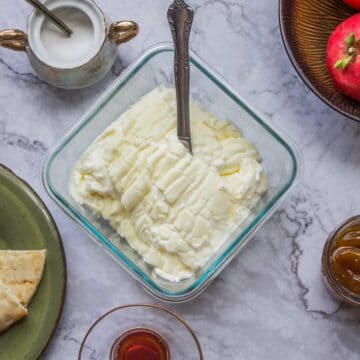