You Are Here Home » Instant Pot and Ninja Foodi Recipes 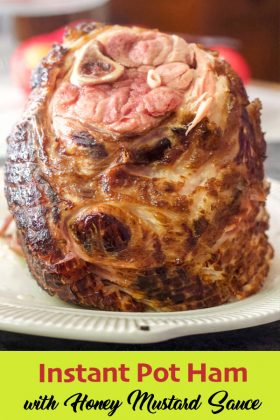 Tender, fall-off-the-bone, pork is on today's agenda. This tasty and super simple Instant Pot Ham recipe takes less than 30 minutes to prepare. Do I have your attention yet? Serve this delicious ham with some Honey Mustard Sauce on the side!

Every year, I bake a ham for Easter; and every year it's such a chore. Not because baking a ham is hard to do, it actually couldn't be simpler. However, the reoccurring issue is that my ham is never ready when it's supposed to be.

After hours of cooking, the ham ends up dried up, yet somehow still cold in the center. Part of the problem is my oven, which always runs lower in temperature than it's supposed to. However, I've talked to other friends who have experienced the same thing.

I've left those issues in the past now that I own an Instant Pot! With this simple Ham Recipe, I can skip the oven and guesswork altogether. Tender juicy ham is not only possible but quite easy to accomplish.

Mix wine and broth and pour into the Instant Pot.

Place the trivet inside the Instant Pot and top with spiral-cut ham (flat side down).

Seal Instant Pot, and select "Pressure Cook." Cook on High for two minutes per pound, or 12 minutes for a six-pound ham.

Once the cooking time has elapsed, let the ham rest for 5 minutes, then do a quick release.

How Long Does it Take to Cook a Ham in an Instant Pot?

Since Spiral ham is already cooked, you will basically be reheating it in your Instant Pot. Start by allowing the ham to come to room temperature for a few hours.

I've found that cooking the ham for two minutes per pound is perfect. This means a six-pound ham will need to cook for 12 minutes (not counting ten minutes to bring the Instant Pot to pressure, and five minutes for natural release).

What Size Ham fits in an Instant Pot?

An important thing to keep in mind when purchasing a ham is the size of your Instant Pot. I own a six-quart Instant Pot and could barely squeeze a six-pound ham in it.

Truth be told, I had an eight-pound ham that I tried to squeeze into my Instant Pot once. However, it quickly became obvious that forcing it was not an option.

After removing enough of the ham layers to reduce the ham to six pounds, it finally fit. Although it was definitely above the "Max Fill" line, the ham still came out great!

The internet is swimming with sweet and sugary, glazed ham recipes. It makes me wonder, is my family the only one left who prefers plain, unglazed ham?

Besides preferring the taste of plain ham, I find you can do a lot more with the leftovers. This includes using the ham to make ham and split pea soup, grilled ham, and cheese sandwiches, or serving it with eggs.

If, however, you want to use the glaze packet that comes with your ham, be my guest. Just prepare the glaze while the ham is in the Instant Pot. Next, pour the glaze over the cooked ham and bake in a hot oven for a few minutes to caramelize. 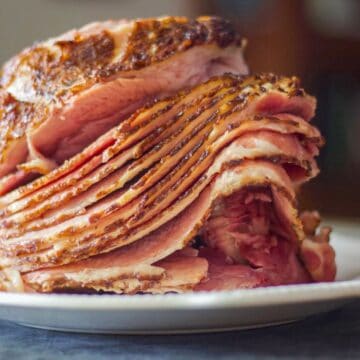