You Are Here Home » Foraging Recipes 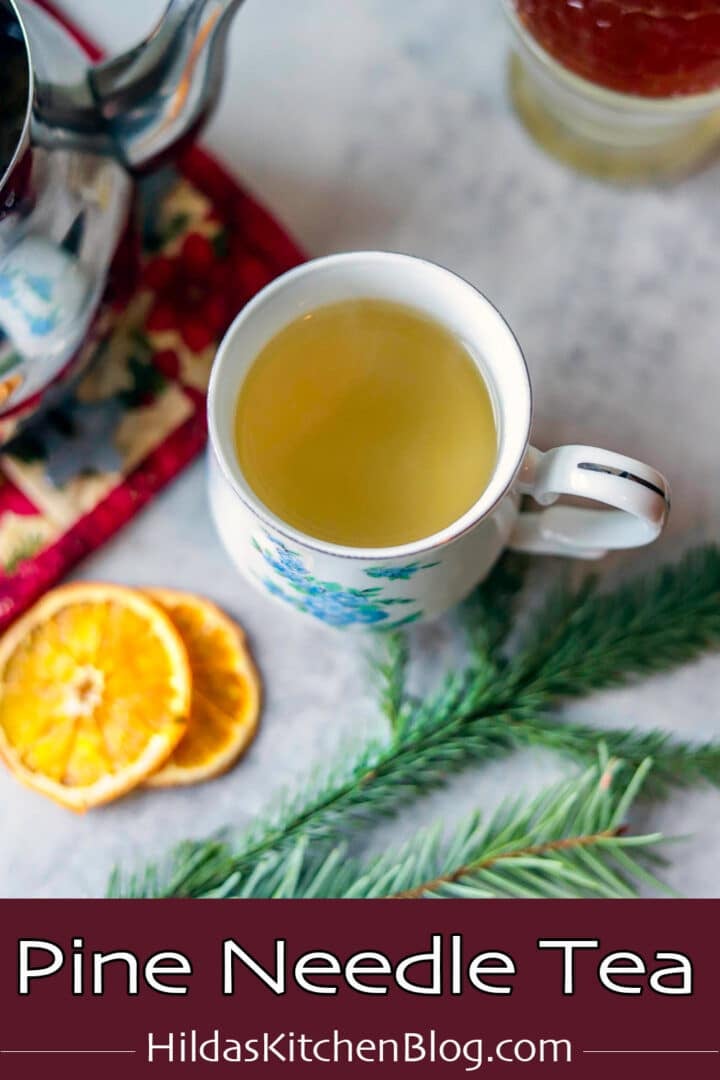 Pine needle tea is a refreshing and citrusy tea with many health benefits! I like to steep the needles with cinnamon, juniper berries, cloves, cardamom, and dehydrated orange slices. You can have Christmas in a cup, any time of year!

If you know me at all, you know one of my favorite pastimes in Montana is foraging! The good Lord has given us (and the animals) so many berries, plants, and mushrooms to harvest (elderberries, chokecherries, and huckleberries to name a few). Although foraging options are limited in the winter, there are always the evergreens!

So this holiday season, snuggle up next to a warm fire and sip on a warm and refreshing cup of pine needle tea. Not only is pine needle tea tasty, but it has many health benefits!

If you'd rather purchase than forage for pine needles, you'll want to check out my Montana Chrismas Blend Pine Needle Tea!

Here in Montana, we have lots of spruce, Douglas fir, lodgepole, and ponderosa pines. We also have the gorgeous larch, a deciduous tree that turns a beautiful gold color in the fall and sheds its needles in the winter.

Because there are studies that show ponderosa pine is toxic, especially to pregnant women, I recommend steeping needles from spruce or fir.

Step 1: Wash and then chop spruce branches (or other edible pine needles) to measure ½ cup. Add the needles and a few orange slices to a teapot. Pour two cups of boiling water into the teapot.

Pro Tip: Don't include twigs or thicker branches. Instead, strip or cut the needles off of the branch using kitchen shears.

Step 2: Simmer the tea over low heat for 15 minutes to extract the flavor and beneficial properties of the pine branches.

Step 3: Strain the tea into a teacup and sweeten it with honey, brown sugar, or the sweetener of your choice. Enjoy!

Optional Step: Try adding mulling spices or your favorite spices to the teapot for an even more delicious cup of pine tea!

If you live in the mountains, you probably have access to pine needles. However, you need to know which conifers are edible and which ones are poisonous.

There are so many species of pine... eastern white pine, norfolk island pine, and Australian pine to name a few. Then there's the common juniper, cypress, and yew.

Some of these pines, especially the common yew, are toxic and should not be used to make pine needle tea! While some may cause stomach upset, others can damage your kidneys or even cause death. For this reason, I suggest that you stick with the ones that are safe, like spruce and fir.

There is mixed information online regarding the safety of consuming pine tea made with ponderosa pine, especially during pregnancy. In one study, pregnant cattle in their 3rd trimester, who ate large amounts of ponderosa pine needles (4 to 6 pounds), aborted their babies.

Although I have had lodgepole pine tea and pine needle soda without any issues, you should proceed with caution and avoid pine needle tea made with these two types of pines especially if you're pregnant or nursing.

Fun Fact: An interesting fact about lodgepole pinecones is that they stay closed until the heat from a forest fire causes the pinecones to open and release their seeds. This process helps to start new growth after a forest fire.

There are many species of pine. In this post, I will be referring to the ones that grow where I live. I encourage you to do your homework and discover what species of pines grow where you live before you go foraging!

Pine trees are usually identified by their size, needles, bark, and cones. In this post, I'll mostly refer to their needles, which are pretty easy to distinguish from one another.

I love spruce! It's a part of the pine family. In the past, I've used fresh spruce tips to make spruce tip pesto. I've also made delicious spruce shortbread cookies. I had planned on sharing the recipe in a future post. Unfortunately, I can't seem to find the recipe anywhere, just the photos. 😬

I also use spruce to make spruce wine an mead (wine made with honey instead of sugar) and spruce shrub.

Needle Identification: Spruce needles are ⅝ to 1" long. They are very pointy and sharp and you can roll the needles between your fingers. In other words, they're not flat. If foraging the needles is a painful experience, there's a good chance you've got yourself a spruce!

Needle Identification: The needles on a Douglas Fir are soft to the touch, flat, and ¾ to 1 ¼" long. It's an evergreen conifer in the pine family, Pinaceae. This means Douglas Fir needles can also be used to make pine needle tea, so drink up!

Can you boil pine needles and drink them?

Yes, you can. The most important thing to remember is to properly identify the tree first to make sure it's not toxic. Yew, for example, looks like pine but is in fact a toxic evergreen shrub.

How do you make good pine needle tea?

Add fresh or freshly dried (green) pine needles to a teapot and cover it with boiling water. Steep the tea for at least 15 minutes then strain it into your cup and sweeten it with honey. For a more festive drink, you can add mulling spices or dehydrated citrus slices. 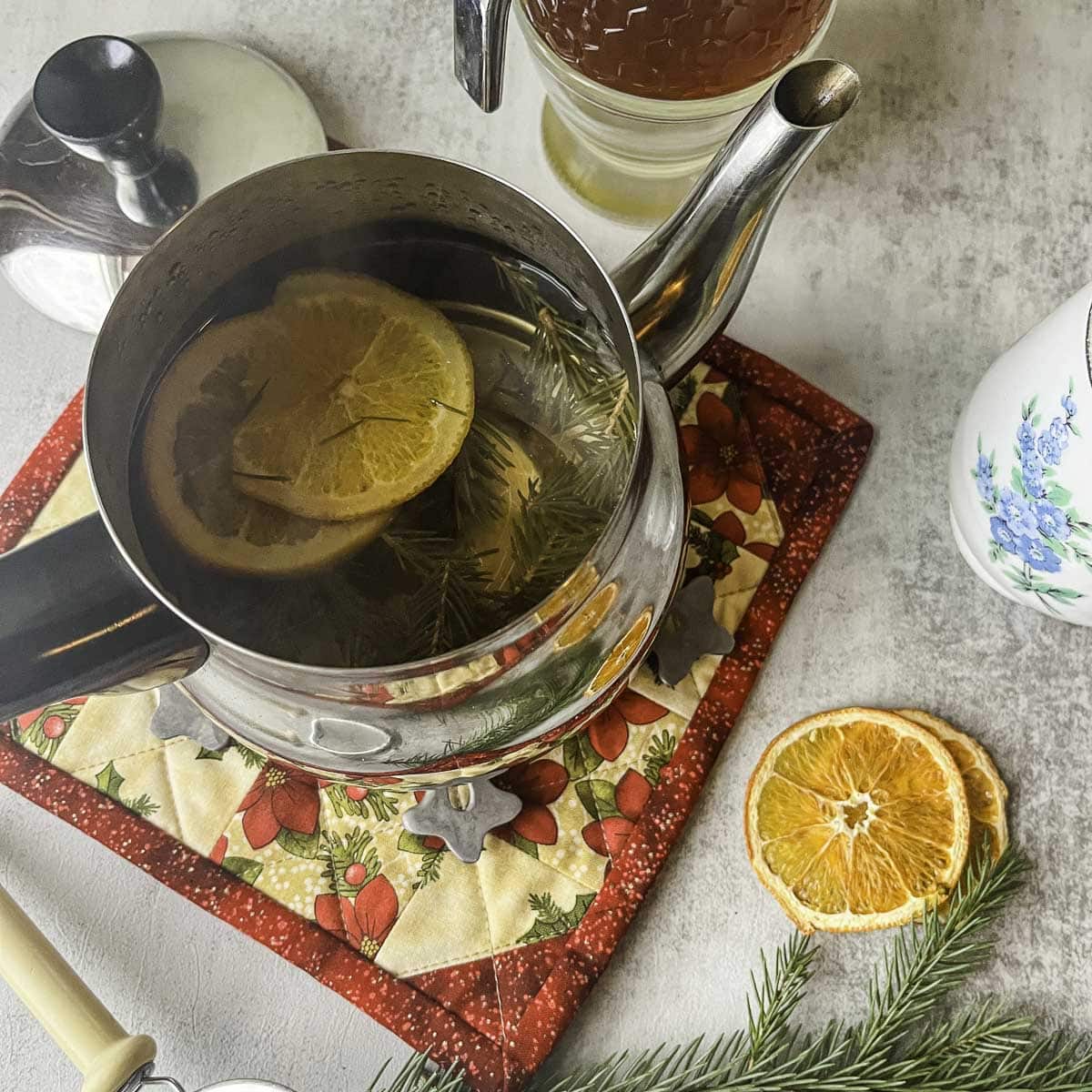 Who should not drink pine needle tea?

Anyone who suspects that they might have an allergy to pine or pollen (since pine trees are often covered in pollen dust) should not consume pine needle tea.

Another group that should avoid pine needle tea is pregnant ladies, especially tea made with ponderosa pine. There have been documented cases of cows aborting their babies after consuming a large amount of ponderosa pine needles.

Can you make pine needle tea from a Christmas tree?

Technically, you can snip off a few sprigs of your Christmas tree (from the back) to brew up some pine needle tea. It really depends on if the type of tree you have is edible or not. You also need to confirm that the Christmas tree is not treated or sprayed with any chemicals.

Pine needle tea is light, minty, and citrusy. The subtle flavor can be enhanced by steeping herbs and spices along with pine needles. 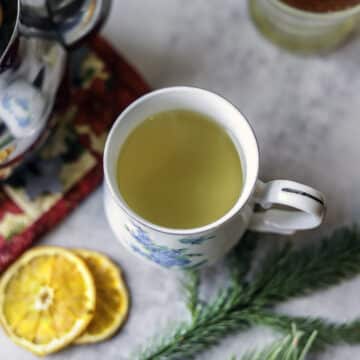