You Are Here Home » Soup and Stew Recipes 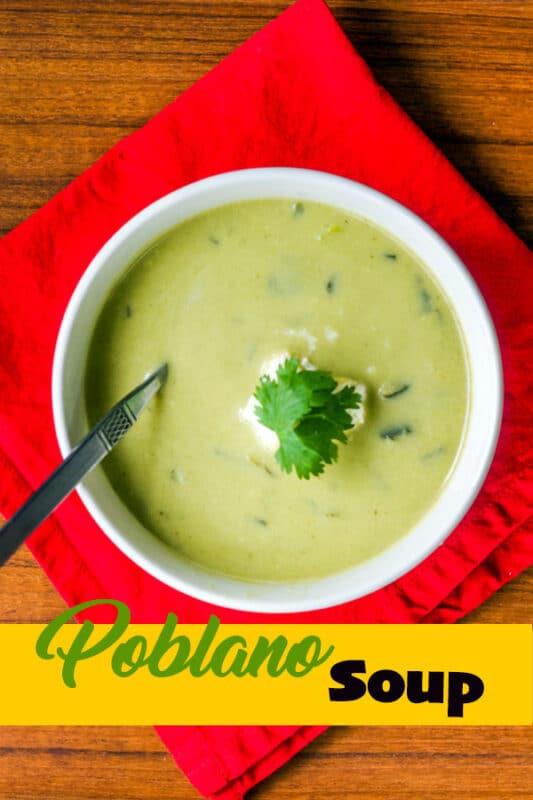 Do you love rich and creamy soups with just the right amount of spice? If so, get ready to fall in love with this delicious Mexican Poblano Soup! And if you have extra poblanos, be sure to try my Easy Chile Relleno recipe!

Earlier this year, my daughter, Nena, got a chance to shoot a destination wedding in Cabo, Mexico. She's an awesome photographer if I do so myself. Don't believe me? Check out some of her work here (NenaSterner.com).

This was her first time in Mexico so she was pretty excited. Being born and raised in San Diego, you could say she is a Mexican food connoisseur, as is the rest of the family.

While there, Nena had "the best soup I've ever had!" (in her own words). After describing the soup, and doing an internet search, we narrowed it down to Poblano Soup.

But the exact flavor Nena was yearning for took some time to perfect. Who knew the missing ingredient would be jalapeno pepper pickling juice?

Some recipes take longer to come together than others. This Poblano Soup recipe came together fairly quickly. However, to gain Nena's approval, it required some tweaking.

The texture is always important, and Nena usually prefers a smooth and creamy texture.

However, after trying different ways of making this soup, we decided on leaving one or two of the poblano peppers chopped, while using an Immersion Blender to puree the remaining soup.

If you prefer a smoother texture, feel free to puree all the peppers into the soup. Stirring in half-and-half or whipping cream to finish it off really makes the flavor pop; we settled on adding one cup.

But the final ingredient that it took to make Nena satisfied that our Poblano Soup was just as good as the one she had in Mexico, was jalapeno pepper pickling juice.

1. Broil poblano and jalapeno peppers until charred on both sides. When the peppers are cool enough to handle, peel off the charred skin, and set aside.

2. Melt butter in a medium-sized pot. Add onion and garlic and sauté for a few minutes. Add flour and salt and cook for a few more minutes, as you stir. Add broth and whisk to combine.

3. Remove seeds from the peppers, then dice. Add to the pot, along with the diced potato. If you'd like some texture in your soup, leave one of the chopped poblanos to add after you puree the other peppers in the soup.

4. Add jalapeno juice and bring to a boil. Turn heat to low, cover, and cook for 30 minutes.

5. Use a hand-held immersion blender to puree the soup. Stir in the reserved chopped Poblano and half-n-half before serving.

They have a rich and smoky flavor and are used to make Chili Relleno. When shopping for Poblano peppers, keep in mind that they may be sold as "Pasilla Peppers" by mistake.

The two peppers are often confused as being the same, and hence, mislabeled.

Poblanos are a brighter green color and wider than pasilla peppers. Pasilla peppers, on the other hand, are long and narrow and are actually dried "Chilaca peppers." 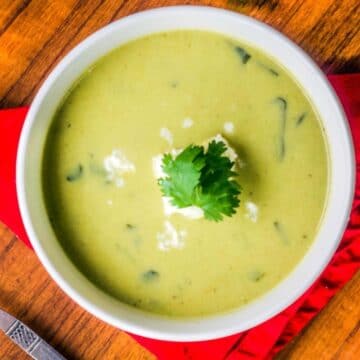