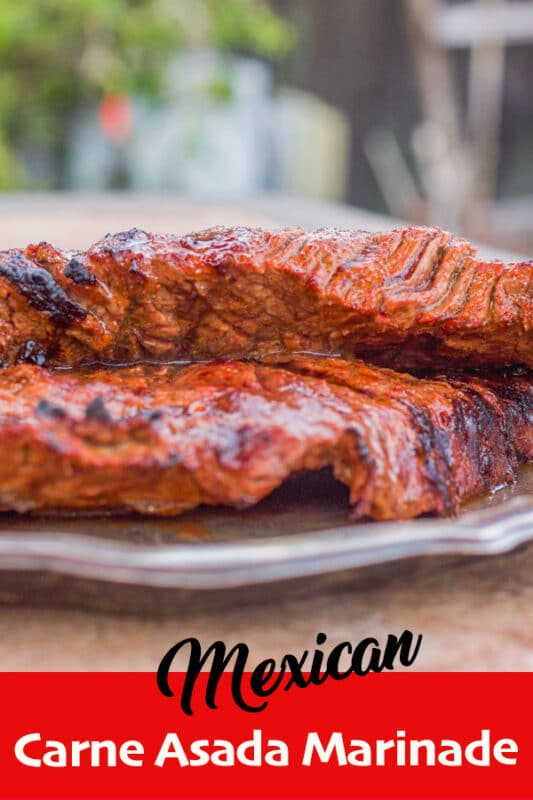 Just in time for Cinco De Mayo, I'm releasing my secret Mexican Carne Asada Marinade Recipe! Don't take this the wrong way, but you haven't had good Carne Asada until you've had it in San Diego. I love to dice the grilled meat into cubes and use it to make California burritos.

The fact that we are neighbors with Mexico means we are spoiled with amazing Mexican food! This includes delicious options like burritos, Carne Asada fries, tacos, and a San Diego original, the California Burrito!

This Mexican Carne Asada Marinade is the first step in making all the delicious food mentioned above. And although soy sauce usually has no business in Mexican food, it really works in this recipe! Don't believe me? Try it for yourself and then let me know what you think!

Until now, this recipe was only given out to a few select "special people." However, as I've gotten older (and wiser), I'm learning that there's no point in holding on to things. This includes my "secret recipes."

What Goes into This Recipe

1. Whisk all the marinade ingredients into a bowl.

2. Add meat and marinade to a large Ziploc bag and seal. Allow the meat to marinate for 4 or more hours, or overnight.

3. Barbecue meat using high heat, until charred on the surface, and cooked to medium-rare or medium. Don't overcook the meat.

4. Remove the meat from the grill and allow to rest for a few minutes.

5. Cut the meat against the grain and serve.

What Cut of Meat is Used for Carne Asada?

First, they are located next to each other on a cow's body. Additionally, both cuts are lean and fibrous.

As a result, both flank steak and skirt steak do well being marinated in this Mexican Carne Asada marinade.

Carne Asada is best when cooked using high heat, for a short period of time, or to medium-rare.

Finally, the cooked meat should be cut across the grain. Following these steps will ensure the Carne Asada is tender, delicious, and full of flavor!

What Goes with Carne Asada?

Carne Asada can be served in so many ways. Let's take a look at some of the possibilities. When served in restaurants, Carne Asada is often served with Mexican Rice and refried beans.

Additionally, if you're doing Keto, or are on a low carb diet, you can slice the Carne Asada meat and serve it over a salad, or wrap it in a low carb tortilla.

Another delicious option would be to serve it diced, over nachos. Or, my favorite option, use it to make a Carne Asada Quesadillas!

Love a recipe you've tried? Please leave a 5-star 🌟rating in the recipe card below and/or a review in the comments section further down the page. 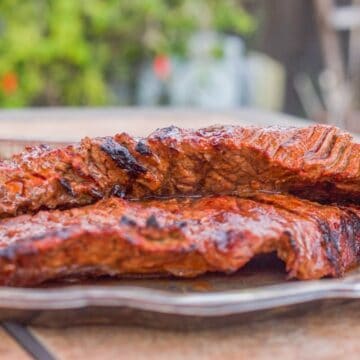 This recipe was originally posted on 5/2/1019 and was updated on 1/8/2021 by adding a few additional images and recipe ingredient notes.