You Are Here Home » Jam and Preserves » Loquat Jam

The loquat is a delicious, plum-sized fruit that can be picked and eaten right off the tree. However, this unique fruit can also be enjoyed in various loquat recipes, like this Loquat Jam, salsa, and Loquat Cheesecake!

Other loquat recipes include loquat wine, cobbler, pie, chutney, and barbecue sauce. They can also be brewed in hot water to make loquat tea.

Loquats can be somewhat sour. Luckily, this makes them ideal for loquat jam or preserves. Adding a pinch of cardamom really balances out the flavor of this unique jam.

This Loquat Jam recipe is super simple and requires just a little preparation. All that's needed is the loquats, sugar, and a splash of lemon juice. Pectin is not needed for this recipe since Loquats are naturally high in pectin.

For a little extra "something-something" consider adding 1/2 of a teaspoon of ground cardamom.

If you don't like cardamom, you can use a vanilla bean instead.

Wash the loquats thoroughly and cut off the blossom end. Next, cut the fruit in half, and discard the seeds.

Remove the blossom end of the loquats, then cut in half. Remove the seeds, and quarter. The peel can be left on or removed. I prefer to leave it on.

Allow for approximately 30 minutes, until the loquats release their juices, and the sugar begins to liquefy.

Stir in lemon juice, and cardamom. Slowly bring to a boil, then simmer over low to medium flame, stirring frequently. After approximately 35-40 minutes, the color should change do a dark amber, and the jam will be thicker.

Use a hand-held immersion blender to blend the jam until you achieve the desired consistency. Keep the immersion blended fully submerged to avoid being splashed with the hot liquid!

What Are Chinese or Japanese Plums?

Loquats are originally from China, and are commonly referred to as either "Chinese Plums" or "Japanese Plums." They are also known as "Japanese medlar."

Loquats are often confused with Kumquats. Although they are nothing alike in taste or appearance. I imagine the reason for the confusion is that both fruits end with "quat" and are somewhat obscure.

One difference between the two is that loquats grow in clusters. Although both fruits originated in China, Kumquats are, in fact, citrus. They look like pecan-sized oranges.

Kumquats are eaten along with their peel. This is because the fruit itself is quite sour. Moreover, the peel is sweet, which balances out the flavors beautifully.

Loquats have thin, smooth skin that can be easily peeled when the fruit is ripe. However, the fruit can also be eaten with the skin on.

When ripening, Loquats go from green to yellow and eventually develop a deep orange hue.

When picked too soon, loquats taste sour. However, if you allow them to fully ripen they are as juicy as a ripe pear. I've seen the flavor described as a mix of citrus, apple, cherry, and plum.

I guess everyone has their own way of describing it. For me, however, a loquat tastes like a mango/peach combination.

Do Loquats Have Seeds?

Each loquat has one to four large shiny, brown seeds. These seeds pop out easily when the fruit is cut, or taken a bite out of. Loquat seeds are poisonous if consumed in large quantities, so be sure to keep them out of the reach of pets and children.

To me, Loquat Jam tastes similar to Peach Jam. It has a definite sour flavor, similar to other jams including plum and apricot jam.

One of the things that affect the flavor of this jam is the flavoring added.

Because loquats are sour, to begin with, very little lemon juice is required. Other flavorings include vanilla and cardamom.

I can't decide which of the two is my favorite. For this reason, I make it both ways. If you don't have vanilla beans on hand, just use 1 teaspoon of vanilla extract.

Is it Hard Growing Loquats?

These days, loquats can be found in many countries, including the U.S., where they can be grown in zones 7-10.

The plant does well in full sun, as well as partial shade. Loquats thrive when planted in well-draining soil, and are watered regularly.

Although loquats can be grown from seeds (like the one my mom planted in her San Diego home), they do better when planted using a cutting.

For more information on growing loquats, check out this Loquat Fact Sheet.

Are Loquats Good for You?

Not only are loquats delicious, but they are also full of health benefits. Some of the health benefits reaped from the consumption of loquats cab be found below.

Loquats are also relatively low in carbohydrates. A large loquat contains right around 2 to 2.5 grams of carbohydrates. So feel free to enjoy this tasty fruit without the guilt!

Other Jam and Preserves Recipes

One of the things I enjoy the most is making jam or preserves. I then get the joy of giving them to family and friends.

That might explain why I have an ever-increasing jam and preserves category on my blog.

If you like this loquat recipe, you might want to check out some of my other jam recipes: 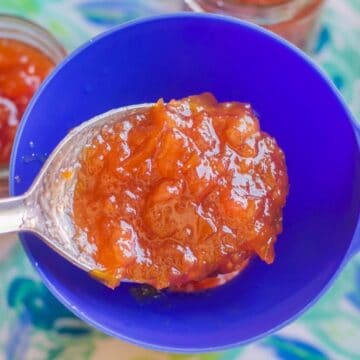