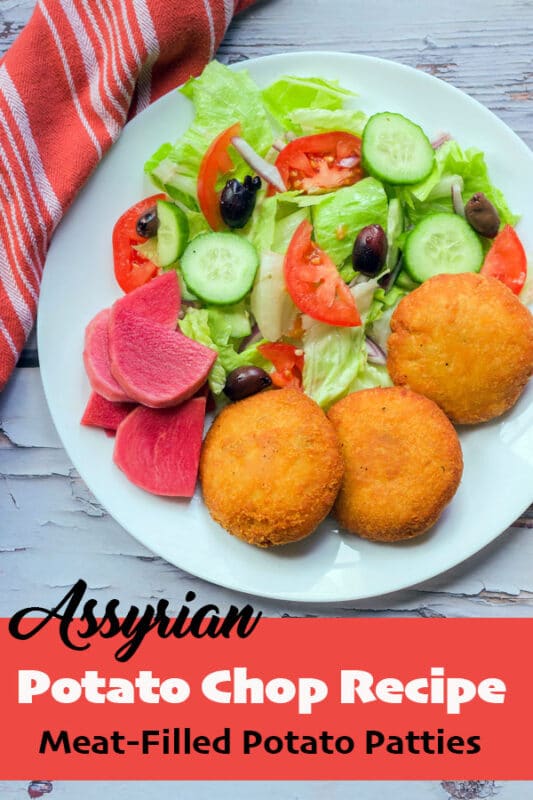 I first shared this recipe in my cookbook, Mom's Authentic Assyrian Recipes, which I published in 2008.

The name "Potato Chop" doesn't exactly sound Assyrian, does it? To be precise, these meat-filled potato croquettes are called "Poteta Chap" in Assyrian.

The word for "potatoes" in Assyrian is "Kirtopeh." However, it is possible that Assyrians picked up this term during the British colonization of Iraq during WWI. Or it could very well be the Arabic word for "potatoes," which is "batata."

The second part of the name, however, makes a little more sense. The word "chap" sounds similar to "," which means "Clapping" in Assyrian. When making Potato Chop, you use a clapping motion to shape the patties. So the name of this recipe would be a description of how these potato patties are made.

Potato Chops are super easy to prepare, especially when you prepare them my way, with boxed mashed potatoes instead of boiling and peeling potatoes, which takes way too much effort!

Since meat and potatoes are pretty filling, all you need is a few Potato Chops and a salad and you will be left satisfied. The patties can be prepared ahead of time and reheated, a few at a time, as needed.

What You Need For This Recipe

STEP 3: Stuff a golfball-sized ball of the potato dough with one heaping tablespoon of filling. Flatten the filled dough balls between your palms into a disc, using a back-and-forth clapping motion.

STEP 4: Heat vegetable oil to 375 degrees F or until bubbles form as soon as you add the patties to the oil. Brown a few patties at a time in the oil, turn when the edges begin to brown. It should take approximately 2 minutes per side.

Although my potato chop recipe has never contained bread crumbs, some do add them (my sister, Rosa, for example).

This is done by first dipping the potato chop in eggs, and then into breadcrumbs. Mom would have never approved of this method. Honestly, I've tried making them both ways, but I prefer them without breadcrumbs.

While the bread crumbs give you a slightly crunchier texture, the potato chop leave behind burned crumbs in the oil. These crumbs then stick to the other potato chop being fried. The end results are not very attractive.

So I've shared before that both of my kids are picky eaters. And when I say "kids," I'm talking 20 and 24-year-olds! But I'm a sucker for altering the recipes to please everyone in the house (I don't recommend doing that unless you love cooking).

In order to get my daughter, Nena, to eat Potato Chop, I replace the meat filling with cheddar cheese. What's better than cheesy potatoes, right? If you have picky eaters or vegetarians at home, try these Cheese-Filled Potato Chops!

Using Potatoes Instead of Potato Flakes

Even though this recipe is perfect just the way it is, there are those who might prefer using the method their moms used to make Potato.

If this describes you, here are the steps to making the potato dough using real potatoes. The filling mixture will be the same.

You can bake Potato Chop as well, but just so you're aware, they definitely taste better fried! There is also a chance that the patties might open up as they bake. But to give this a try, follow these simple steps:

For an even easier version, divide the potato mixture in half. Press half of the dough inside a buttered baking dish. Spread the meat mixture evenly over the potatoes.

Carefully spread the remaining potato dough over the filling mix, and brush the top with melted butter. Bake at 450° for 20 minutes.

What is a Potato Chop?

A Potato Chop is a round potato croquette filled with a tasty spiced ground beef filling. Once formed, the potato patties are deep-fried until golden brown and served as an appetizer or a light meal, usually accompanied by a salad.

Can you freeze Potato Chops?

When you freeze Potato Chop, they inevitably retain moisture, which makes them fall apart when fried. A better option is to refrigerate the patties if you need to make them a few days ahead of time. Alternatively, they can be fried first then frozen. The patties can then be defrosted before reheating in a toaster oven or an air fryer.

How many calories are in a Potato Chop?

Potato Chops prepared with boxed potato flakes average 105 calories each. This does not take into account the amount of oil absorbed when fried. Add an additional 40 calories for each teaspoon of oil absorbed by the croquettes.

I am always amazed at how similar recipes are prepared by various cultures. This Potato Chop recipe is certainly no exception.

Although she wasn't personally familiar with that recipe, she introduced me to a Cuban meat-filled potato patty recipe called "Papas Rellanas."

These patties look identical, but the meat filling is spiced differently. Come to think of it, what is a Shepherd's Pie if not a larger, baked version of Potato Chop? 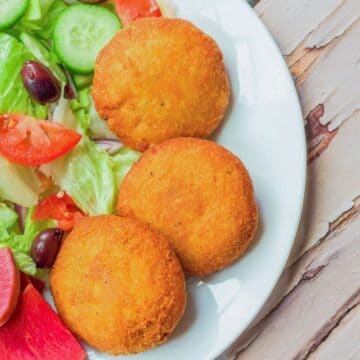 The calorie information is for unfried Potato Chop. It's hard to predict the amount of oil that will be absorbed during frying.