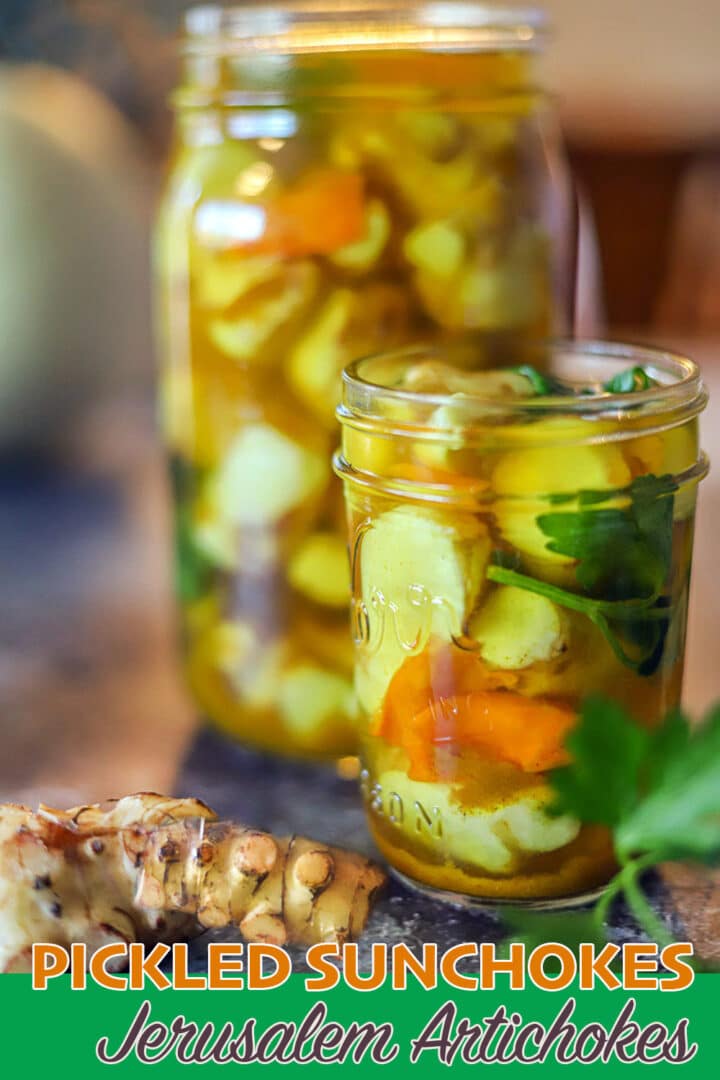 In this Jerusalem Artichokes Recipe post, I'll be sharing my favorite way to enjoy these surprisingly sweet and nutty tubers, pickled! There are many Sunchoke Recipes online, but this is by far my favorite! Torshi, including pickled sunchokes, are served on the side with Assyrian meals, especially with stew and rice.

"Sunchokes" are called " " in Assyrian. This name translates to "Ground Apples." "Earth Apples" also happens to be one of their names in English. Other names include "Sunroot" and "Canada potatoes."

🌻 How to Make Pickled Sunchokes

STEP 1: Thoroughly clean sunchokes to remove all the soil and dirt. Trim any dark spots or knots off, and peel if needed.

STEP 2: Stir half of the salt into one quart (4 cups) of cold water, and mix until the salt is dissolved.

STEP 3: Place sunchokes in a large sterilized jar. Cover with the brine solution.

STEP 4: Leave the lid untightened to allow the gases to escape.

STEP 5: Place the bottle in a dark location for one week. Check the bottled sunchokes after three days. There should be a build-up of gases. If not, be patient, it will happen.

STEP 6: When the brine does get murky and the gases float to the surface drain the old brine and make a new batch. Brine the sunchokes for approximately four more days.

STEP 7: Once the sunchokes have been brined for one week, remove them from the brine and rinse them with fresh, cold water.

STEP 8: Pour vinegar into a saucepan and bring to a boil. Remove from heat and stir the curry into the vinegar until combined. The curry will still settle to the bottom, which is ok.

STEP 10: Add the contents of the pot to sterilized jars and store in the refrigerator. Mine yielded two jars (one quart-sized jar and an eight-ounce jar).

The pickled sunchokes will be ready to eat after three days but will taste better the longer they're allowed to pickle.

Note: Mom always kept her mix of pickles in a large plastic ice cream tub. You know, the kind with the red handle? She made a lot of pickles and added more when the tub got low.

Jerusalem artichokes are neither artichokes nor are they from Jerusalem. Sometimes they're referred to as "sunchokes."

Jerusalem artichoke is a perennial weed that can grow to be around 7' tall. A species of sunflowers, the plant has beautiful yellow flowers, 2"— 4" in diameter.

The flowers resemble sunflowers, which is why this plant and its tubers are also referred to as sunchokes. I will be using both names interchangeably in this post.

Although considered an invasive weed, the plant does have one delicious benefit; the edible tubers that grow beneath it. 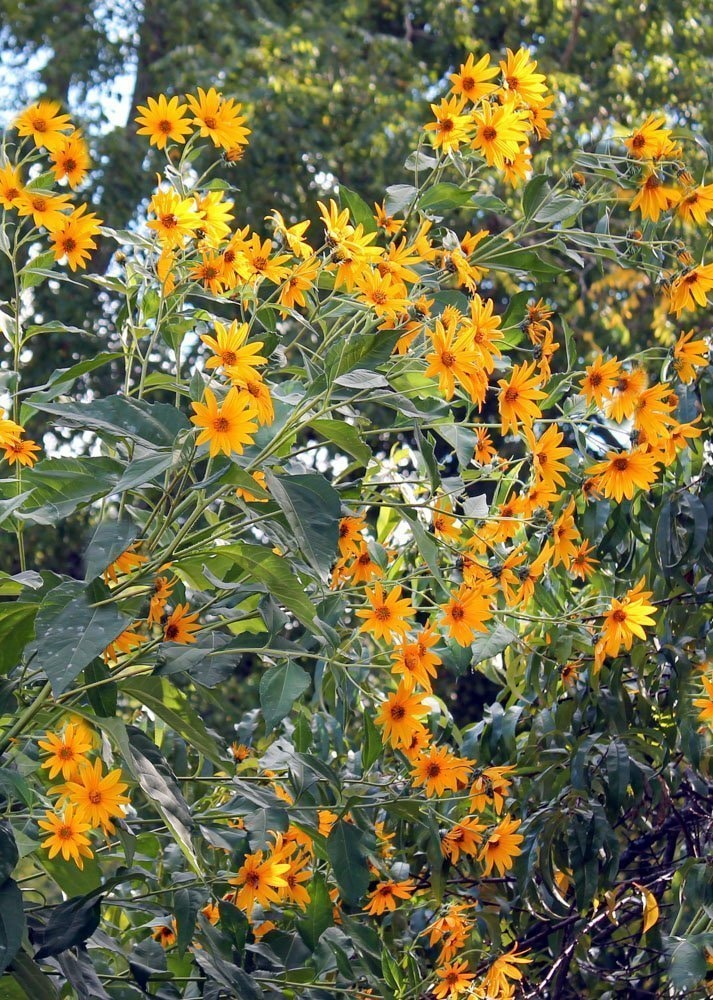 Similar to potatoes in taste and texture, but sweeter, sunchokes are healthier than potatoes and lower on the glycemic index.

The 3"— 4" long tubers can be used in recipes that call for potatoes and are a great option for diabetics. 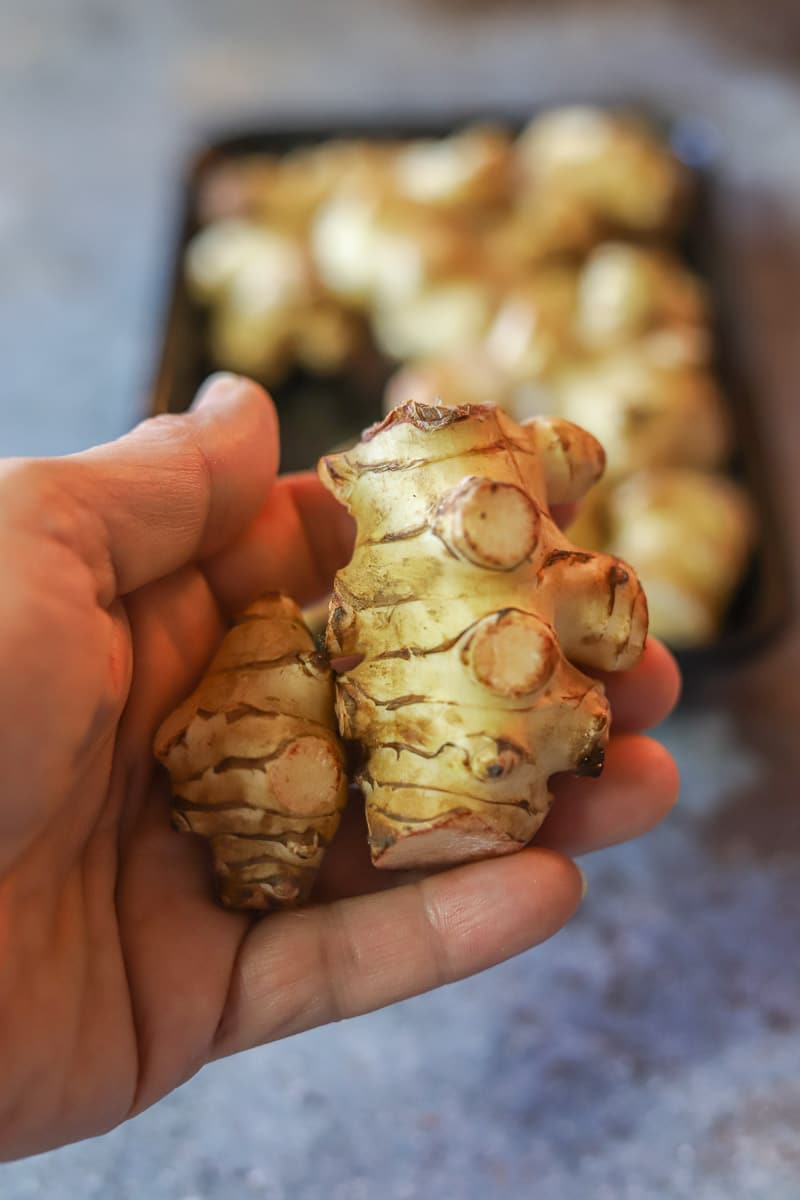 Do Sunchokes Need to be Peeled?

Jerusalem artichokes can be enjoyed both peeled and unpeeled. For the purpose of this pickled Jerusalem Artichokes Recipe, you can do either.

Personally, I only peel the areas that are either dark or knotty. If you plan on eating them unpeeled, be sure to scrub them thoroughly with a potato scrub brush. 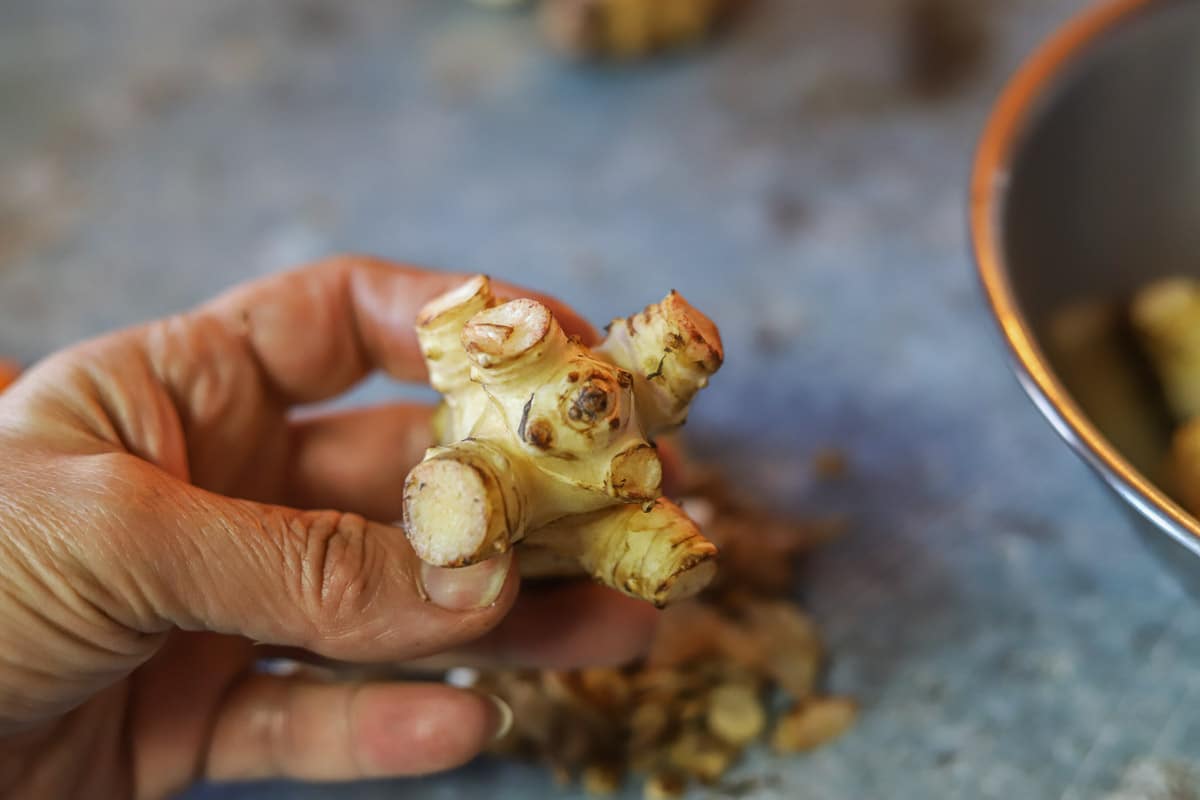 Can You Eat Jerusalem Artichokes Raw?

Unlike potatoes, you can eat sunchokes raw. They have a crunchy texture and a mild flavor. Some people slice or julienne the sunchokes and add them to salads for added flavor and crunch.

A word of caution, however. Some people experience stomach distress and flatulence from eating raw sunchokes.

Sunchokes can also be roasted, mashed, fried, and scalloped.

In my immediate family, Jerusalem artichokes were only eaten pickled. Mom also pickled green tomatoes, eggplant, and turnips. However, pickled sunchokes have always been my favorite, probably due to their crunchy texture.

When Are Jerusalem Artichokes Available?

In the United States, Jerusalem artichokes usually make their appearance in a few grocery stores in late Fall, or early Winter. They are harvested after the first frost.

Since they are so hard to find in stores, another option is to grow them yourself. The tubers can be purchased from catalogs.

If you can find them locally, you can try planting a few and see how it goes. Just make sure you have plenty of space to grow them because they are very invasive.

To learn more about growing your own sunchokes, check out this informative article about Growing Jerusalem Artichokes.

Do Jerusalem Artichokes Make you Fart?

"Jerusalem Fartichokes" can indeed cause flatulence. This is due to the high content of inulin found in these tasty little tubers.

"The inulin cannot be broken down by the human digestive system but it is metabolized by bacteria in the colon. This can cause flatulence and, in some cases, gastric pain."

When I first saw all the information on the internet regarding the flatulence-causing effects of the Sunchokes I was really surprised.

I don't remember experiencing this issue when eating pickled Jerusalem artichokes. After doing a little research on the matter it all began to make sense.

I recall mom brining the tubers in large containers after harvesting them. The liquid would become very cloudy and gaseous. It would need to be replenished with fresh brine a few times a week.

This went on for a few weeks, up to a month. Mom said that this process was necessary to release the gases from the sunchokes.

In the back of my mind, I thought this was an unnecessary step and wanted to hurry the process along, but mom didn't budge.

However, my recent research led me to the following information that validates mom's methods of preparing sunchokes:

During this pickling process, lactobacillus bacteria gorge on the inulin and convert it to gas, which manifests as bubbles in the pickling jar, rather than your intestines.
By the time the pickles are ready to eat, the inulin has already been mostly consumed, and the “bacteria farts” float away painlessly when you open the jar.
(Modern Farmer)

It turns out that this brining process, also known as lacto-fermentation, has many health benefits. This explains why foods like sauerkraut and kimchi are known for their nutritious value and their ability to aid in the restoration of gut health.

Why did I ever doubt my mom? Without knowing the fancy terminology, or the science behind it, my mom, and her mom before her, knew how to overcome the gassy effects of sunchokes. Quite impressive, don't you think?

This Jerusalem artichoke recipe will forever remind me of my mom. Not only because she made the BEST pickled sunchokes. No, it’s because sunchokes were partially responsible for her developing lymphedema.

Mom wasn’t supposed to do anything strenuous with her arm after her lymph nodes were removed (due to breast cancer.

Unfortunately, mom, who loved working in her garden, single-handedly pulled many sunchoke plants from their roots, so she could pickle the tubers.

Her arm swelled almost immediately and it never went back to normal. So if you enjoy this Jerusalem artichokes recipe, give mom a little nod, would you? 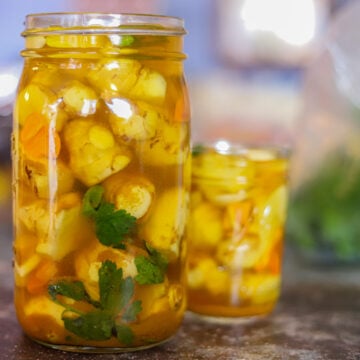