You Are Here Home » Entree Recipes 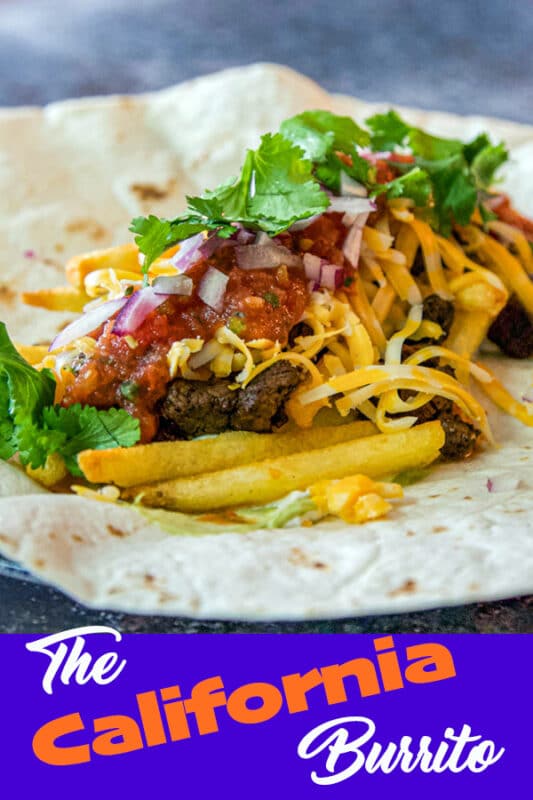 I'm so excited to be sharing my California Burrito Recipe with you! Have you tried a California Burrito? This humongous burrito is filled with cubed Carne Asada, hot french fries, creamy guacamole, Mexican salsa, and more! If you prefer seafood, check out my Crispy Tilapia Fish Burritos Recipe!

🌴What is a California Style Burrito?

Although it's known as the California Burrito, the only place you can get your hands on one is in Southern California, and more specifically, San Diego. My neighborhood is littered with taco shops, but Estrada's is my favorite! They make a mean California Burrito!

Sure, Montana has a lot to offer, but Mexican food is not one of them. With this in mind, I decided to deconstruct the California Burrito. My goal was not only to figure out how to make one but to perfect the recipe.

Guess what? I believe I've done it! If your upcoming travel plans don't include San Diego, it's ok. Just follow my easy California Burrito recipe. It's sure to be a family favorite!

🌯 How to Make A California Burrito

There are many components to making a California Burrito. It's easier to make some of these components ahead of time. This includes guacamole and salsa.

Use store-bought red salsa, or make your own. I have a few recipes you can try. My Mexican Salsa or a spicier Roasted Salsa recipe.

Begin by marinating the Carne Asada for three to four hours. Dice marinated meat and cook in a heated skillet, over high heat, until the flank steak is cooked and slightly charred on the outside.

Tip: You can skip the Carne Asada marinade used to marinate the flank steak (or skirt steak) if you're in a hurry. Instead, use seasoned diced sirloin. See recipe notes at the bottom of the page for more detailed information.

Deep-fry the fries in 375-degree F. oil until golden brown. A healthier option is to bake the fries in the oven or in an air fryer (paid link).

Step 5 | How to Assemble A California Burrito

To start, you need an extra-large burrito-sized tortilla, something comparable to the one pictured below. The a size is 12". Slightly char the tortilla over a flame, to soften.

Spread creamy guacamole and sour cream in the center of the tortilla.

Top the fries with shredded Mexican cheese (or cheddar cheese), salsa, or pico de Gallo. Finish off with cilantro and diced onions, if desired.

Microwave for one minute and roll tightly into a burrito (or roll first, then microwave).

Pro Tip: If preparing the California burritos to enjoy later, wrap the burritos in foil to keep them warm. The foil will also help to form the burritos' shape.

Who Invented the California burrito?

In my Easy Breakfast Burrito post, I discuss the origin of the burrito. But when it comes to the California Burrito, I'm happy to say it's a San Diego original!

It is believed that the first California Burrito Recipe was created in 1980. It was developed in an unknown Mexican Taco Shop in San Diego.

However, a chain, formerly known as Santana's, claims to be the creator of the first California Burrito Recipe.

Like the Carne Asada Burrito, a Cali burrito is an experience that should not be missed by any San Diego tourist.

After all, New York has its Thin-Crust Pizza, Chicago its Deep-Dish, and Philadelphia the Philly Cheesesteak. However, San Diego is known for Mexican food.

What Comes on a California Burrito?

The California Burrito stands out from other burritos and is easily distinguished by one particular ingredient, potatoes. Or more specifically, french fries.

To make a California Burrito, you have to begin with the largest tortilla you can find. Next, you will need some creamy guacamole.

Making a California Burrito is like taking Carne Asada Fries (another San Diego classic) and wrapping them in a blanket of love.

If you can polish off one of these huge burritos, it will leave you stuffed, yet satisfied! Personally, I cut the burrito in half and make two meals out of it... yes, it's that big!

How do you Make A California Burrito?

This California Burrito recipe is pretty simple, but it does require some planning. This includes marinating the Carne Asada and frying the french fries.

Not only that, but you also need salsa (or pico de gallo), and creamy guacamole. All these ingredients should be prepared prior to assembling the burrito.

If you liked this recipe, check out some of my other Mexican dishes including my Pressure Cooker Carnitas, Instant Pot Tamales, and Chile Verde. 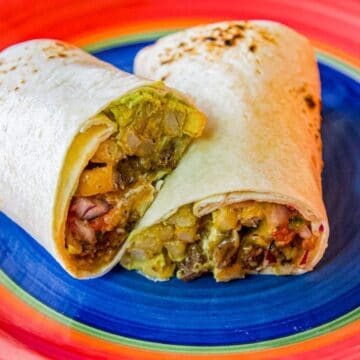