This barbecued sumac chicken recipe is the bomb! The sumac in the marinade lends a beautiful, tangy flavor, while the garlic, thyme, and crushed red pepper flakes do their own magic!

This grilled chicken recipe is very straightforward, and best of all, you don’t need any cooking skills to succeed! But don’t let that detail fool you, it’s definitely not just another barbecued chicken recipe.

As a matter of fact, my husband, Scott, recently gave me the best compliment when I grilled Sumac Chicken for dinner. He said it was the best chicken he’s ever had!

If you’re following a Keto or Low Carb lifestyle, this chicken recipe fits in both categories! I often serve this sumac chicken with my Low Carb Cheesy Brussel Sprouts.

Sumac powder has a sour, lemoney taste. It’s a great substitute in recipes that call for lemon, especially when used in marinades.

If you’re like me and love the flavor of lemons, you can use a combination of lemon juice and sumac powder for an extra lemony flavor.

What is Sumac and How is it Used?

You may not be familiar with the spice known as Sumac. This tasty powder can be found in most Middle Eastern markets. But if you don’t have access to one, there’s always Amazon!

Sumac starts off as a small, low tree, or shrub, that grows in East Asia, Africa, and North America. “Sumac” means “red” in Arabic, and similarly, in Assyrian, the word for “red” is “smuka.”

The flowers (fruit) of this sparsely-leaved plant are called “Sumac Bobs.” The fruit of some of the species is ground into a sour, crimson-colored powder.

This powder, known as “sumac,”  is used in many Middle Eastern recipes. For this reason, you’ll see it on a regular basis in my recipes.

You want my advice? Just go ahead and purchase some now, you’ll need it often! To learn more about sumac, check out the following article.

This barbecued sumac chicken goes great with just about everything! I like to serve it with Tasty Mashed Potatoes (), Vermicelli Rice, and Tabouli. However, it goes just as well with some grilled corn on the cob or Potato Salad.

Because this is not really a “traditional Middle Eastern recipe,” you don’t have to limit the sides to Middle Eastern options. Another great idea is to drizzle the chicken with some Balsamic Vinegar Glaze.

Do you Pinterest? Please do this girl a favor by pinning and sharing!

If you love this Sumac Chicken recipe, please give it a 5-star rating! 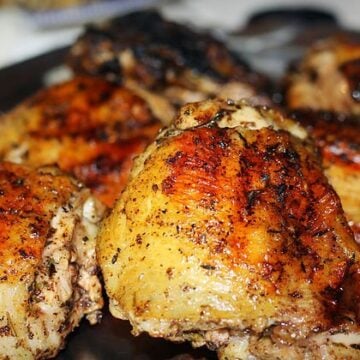 Allow me to share some new recipes (and ingredients) and reintroduce you to some classic favorites! (learn more…)