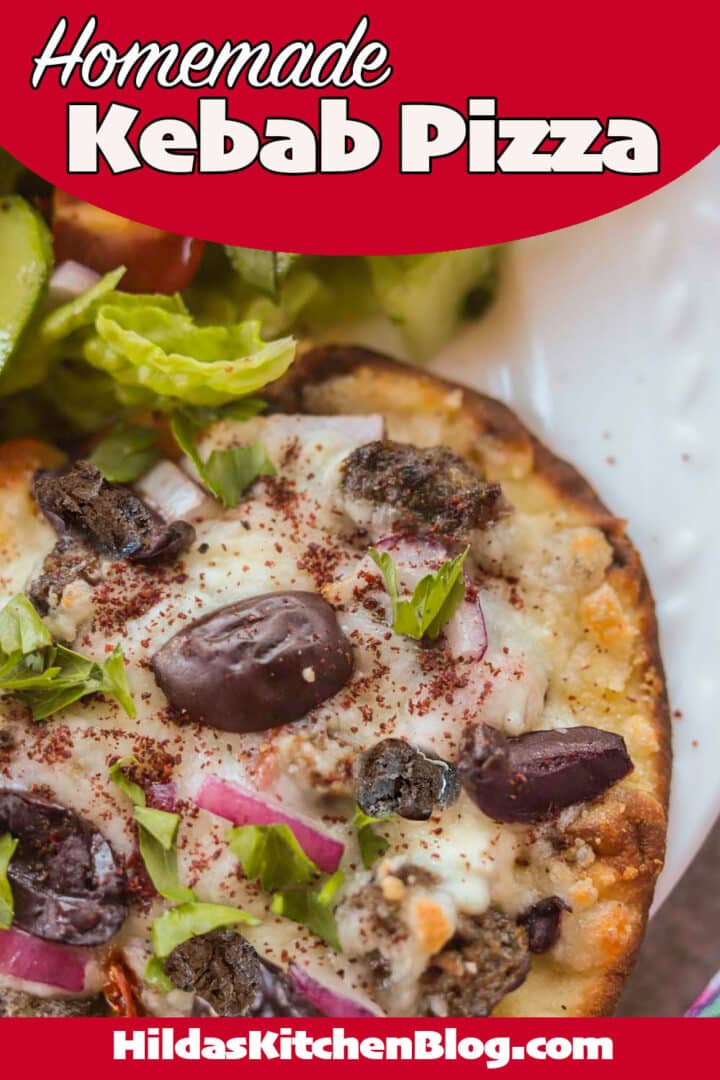 Crispy naan bread drizzled with tahini sauce and topped with cheese, your favorite veggies, kofta kabob, and dusted with sumac powder. Who knew these simple ingredients could make such an outstanding kebab pizza? It's different than Sweden's Kebab pizza but still mouth-watering and delicious!

I recently came up with this Kebab pizza recipe after eating kofta kabobs, salad, and vermicelli rice for an entire week! Even though I'd be happy to eat that daily for the rest of my life, I decided to create a new recipe with it instead, or at least I THOUGHT it was new. 🤷‍♀️

Come to find out, kebab pizza already exists! In fact, Sweden kebab pizza (also referred to as doner kebab pizza) is quite popular! Not only in Sweden but also in the UK and Denmark.

However, Sweden's kebab pizza is different than my recipe. For one thing, Sweden Kebab pizza has red sauce and it's topped with doner kebab. You can read about the differences between "doner" and "kofta" kabob in the FAQ section of this post.

Speaking of differences, you may be wondering what the difference is between kebab and kabob. There is no difference. In the U.S. we say "kabob" and in Europe, they say "kebab."

Doner kebab pizza is usually drizzled with a thin sauce made of garlic yogurt (or sour cream) and topped with pepperoncini. But enough about their pizza, let's move on to MY Kebab pizza recipe!

I encourage you to experiment with different ingredients within reason. Substitute your favorite cheese or veggies, just try to keep your ingredients within the Middle Eastern or Mediterranean spectrum. Use this Ethnic Food Combinations Guide for some ideas!

🍕How To Make Kebab Pizza At Home

Preheat the oven to 475 degrees F. & place a pizza stone in the oven.

STEP 2: Next, add shredded mozzarella cheese, sliced onions, and black olives. Transfer the pizza to the pizza stone and bake for 10 minutes or until the crust is golden brown and the cheese is melted.

Pro Tip: To make a larger pizza, you will need to adjust the quantity of the other ingredients. Also, if you don't have a pizza stone, you can use a pizza pan instead.

What is kebab meat?

Kebab is almost always prepared with either beef, lamb, or a combination of the two. The meat is mixed with various spices, minced onions, and fresh herbs.

What's on a kebab pizza?

In Denmark, Kebab pizza consists of cheese, shawarma, lettuce, tomatoes, and sliced cucumber. The pizza is finished off with a dressing made with sour cream.

Kebab pizza has spread to other countries too, where the ingredients are different still.

What is the difference between Kofta Kabob and Doner Kebab?

Kofta kabob is prepared with a mixture of ground beef or lamb, mixed with ground onion, parsley, salt, and pepper. Sometimes eggs or breadcrumbs are added as a binder. Kofta Kabob is usually grilled over charcoal.

Doner kebab, on the other hand, is prepared on a spit, similar to gyros. It consists of similar ingredients, the main difference being the manner in which it is cooked.